Arbitration under the Rules of ICAC at the RF CCI

Grebelsky & Partners has extensive experience in representing clients in the International Commercial Arbitration Court at the Chamber of Commerce and Industry of the Russian Federation.

Areas of practice
Choose a section
About practice
Experience
Publications

The ICAC at the RF CCI (International Commercial Arbitration Court at the Chamber of Commerce and Industry of the Russian Federation) is the oldest and most demanded arbitration institution in the entire Post-Soviet space. However, the proceedings in this arbitration court still pose a particular difficulty for international entrepreneurs.

Such proceedings have a number of characteristic features, and not all lawyers, even those actively practising in state courts, are familiar with these features. Thus, the ICAC at the RF CCI applies several Rules, each of which is drawn up for a particular category of disputes. The most in-demand today are the Rules of Arbitration for International Commercial Disputes and the Rules of Arbitration for Internal Disputes.

When it comes to arbitration, the disputing parties often have disagreements on the competence of the arbitral tribunal, applicable law, its content, procedural features of the proceedings, which are very different from the rules provided for in state courts. All this requires the involvement of lawyers specializing in Private International Law and International Commercial Arbitration.

As a rule, in each case in the ICAC the arbitral tribunal includes arbitrators who are prominent scientists and practitioners. It is essential that the representative of the party could speak with them in the same language (sometimes it is the language of legal doctrine in its pure). Wrong actions of the representative, his lack of knowledge in theoretical issues can lead to the most unfavourable consequences and end in defeat in the dispute.

The lawyers of Grebelsky & Partners have long and successfully defended the interests of domestic and foreign entrepreneurs in the ICAC at the RF CCI. International commercial arbitration is the main practice area of the firm. That is why we have a great store of practical knowledge and skills in this area: we have experience in applying the 'narrow' provisions of the ICAC Rules; we know how to establish effective interaction with the Secretariat of this institution; we are familiar with by an absolute majority of not only Russian but also foreign arbitrators included in the recommended list of the ICAC. It is important that we also know most of the lawyers who can be involved in the case on the side of opponents. All this directly affects the outcome.

We provide legal support at all stages related to arbitration proceedings in the ICAC, including the assessment of the arbitration agreement, preparation and filing of a statement of claim or defence, participation in oral hearings, recognition and enforcement of ICAC awards in Russian and foreign state courts.

The lawyers of the firm have deep theoretical knowledge of arbitration. Managing partner of the firm Alexander Grebelsky is a recognized specialist in the field. For several years, he has been giving lectures on International Commercial and Investment Arbitration at the Department of Private International and Civil Law of the Moscow State Institute of International Relations (MGIMO University). The main backbone of the Department is the arbitrators of the ICAC at the RF CCI.

Scientific and professional contacts of the firm in the field of international arbitration help our lawyers to solve one of the key tasks in preparing a case for arbitration – the task of choosing a knowledgeable arbitrator, whose candidacy is optimal for particular proceedings, who has sufficient qualifications and the ability to resolve the dispute quickly.

The practice of the firm at the ICAC at the RF CCI is truly diverse. It includes disputes under a sale of goods, construction, lease, insurance, freight forwarding and other types of contract.

The law firm has successful experience in the field of recognition and enforcement of ICAC awards abroad, for example, in such jurisdictions as China, Germany, Cyprus, Ukraine, and others, makes it possible to achieve prompt execution of the award. Also, we have taken part in numerous litigations related to setting the ICAC awards aside in Russian state courts.

The lawyers of the firm work in close cooperation with in-house lawyers and the management of client companies, trying to take into account their interests as much as possible, continuously inform and advise them during the proceedings. We have earned the trust of our clients in resolving international commercial disputes, and therefore, most of clients return to us again and again.

Below you may find brief examples of the recent international arbitration proceedings under the Rules of the ICAC at the RF CCI, in which our lawyers have successfully represented Russian and foreign clients:

A.V. Grebelsky ‘The end of an era? The Fate of Investment Arbitration in the Light of Attempts to Create an EU Investment Court System’ in A. Muranov (Ed.), V.Kabatov, S.Lebedev: In Memoriam. Collection of memoirs, articles, other materials. 2nd ed. Statut Publishing, 2017. P. 476.

A.V. Grebelsky ‘Nationality of Investor as One of the Conditions for the Investment Protection by the Recipient State’ in E. Zavyalova, V. Kondratiev (Ed.), Corporate governance as a factor in increasing investment attractiveness. MGIMO Publishing, 2014. P. 265.

A.V. Grebelsky ‘Actions of State Courts in Support of International Commercial Arbitration’. Bulletin of the State Registration Chamber under the Ministry of Justice of the Russian Federation, 2013. Vol. 2. P. 12 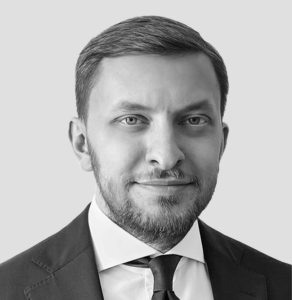